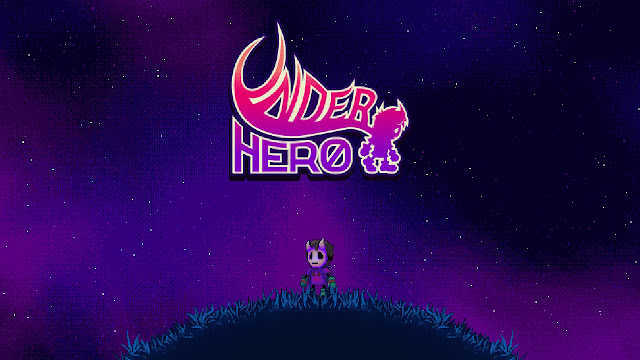 In my first Quarantine Game Rec back in May covering One Step from Eden, I discussed orphaned game mechanics and gave a whole bunch of examples, many of which were unrelated to the subject. One of those examples I namedropped was the original Paper Mario*, with Underhero being named as a successor to the mantle. As it turns out, that was what we like to call “foreshadowing”, because it’s the game that I’m covering today.

*Which, funny enough, has gotten a new sequel announced that looks much closer to the original two games in the month and a half since I wrote that.

Underhero is the debut game of studio Paper Castle Games. I played it on Switch, but it’s available for PC, Mac, and all game systems (and, in fact, if you chipped in for the recent itch.io Bundle for Racial Justice and Equality, it was included in there as well!).

And, as I alluded to, it’s a sort-of platformer-slash-RPG, with the notable twist on the formula being that the battles trade the normal turn-based system for a more free style approach, where you and your foes are limited solely by your stamina bar. You can attack or dodge only as long as you have the energy to; do too many things and you’ll be helpless until it recharges, with successful dodges speeding up the process. It means that you need to learn to properly balance the two elements while not strictly limiting you by a turn counter, which makes for an interesting dynamic.

Of course, for as interesting as the battle system was, that wasn’t my favorite element of the game. No, the single biggest draw for me was the writing, which was clever and amusing at every level, from the broad concepts to the minute-to-minute banter.

Let’s start at that broad overview: you play as a Masked Kid, a Shy Guy-like minion in the army of the evil Mr. Stitches (who has a great villain design for an evil overlord, I might add, with an iconic “burlap puppet being piloted by shadowy evil core” feel). You’re not even a particular memorable Masked Kid, just number 745. 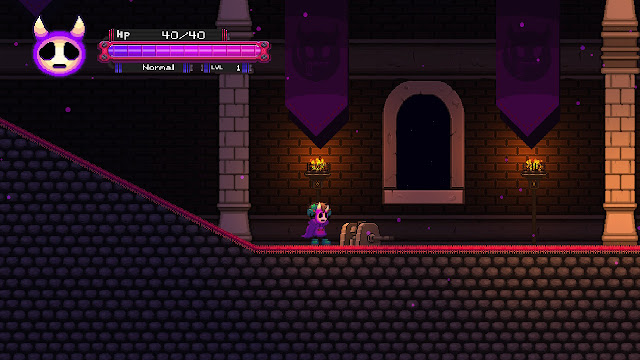 Of course, it turns out that what actually sets your Masked Kid apart is that they dare to ask the hard questions in life, like “why fight the Hero of Legend directly when we can just drop a chandelier on him while he’s distracted?”, which leads to you successfully offing him. Of course, that just catches the attention of Mr. Stitches, who can’t stop being creepy even when he’s treating you as his newly-promoted assistant.

This leads to Stitches sending you on a mission that is ostensibly to return the magical artifacts to the Boss Monsters of his army in preparation for the inevitable next hero, but there’s clearly something deeper going on. And further complicating matters is that you have wound up in possession of Elizabeth IV, the magical talking sword of the late hero, who is adamant that you take up the late hero’s quest to overthrow the tyrannical grasp of Lord Stitches. 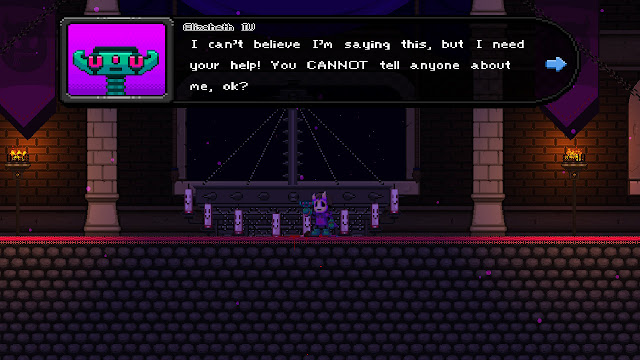 And, as far as short pitches go, that’s a pretty fun set up for a game. There’s a pretty clear “juggling of dual lives” conflict that Paper Castle is great at milking for comedy and drama. And really, that applies to most aspects of the game; it’s great at taking the broad tropes of other games and crafting them into something recognizable, yet also recognizing the potential for adding their own unique twists to make them into something more interesting.

One of the more common ways it does that drilling down into those common tropes even more to come up with unique ideas, either by looking at the mundane side of the fantastical, or looking for silly twists on genre conventions. For example, the main hub world is the backside of a traditional video game “Final World” level, complete with minion break room, cafeteria, and service elevators to both the boss’s lair and generic apartment complex for minor enemies. Or the main buddy duo being taken to an extreme, consisting of a jaded, sarcastic, but still all-in mentor and a cowardly, semi-reluctant protégé, who happen to also contrast in that one is an extremely talkative sword who can only instruct you, and the other is your expressive, yet still totally mute Masked Kid minion.

The other surprise Underhero uses is a gradual change in its genre. It starts out as a sort of “heroic quest buddy comedy”, and it takes the main happenings largely seriously even if the characters engaging in it are a little goofy. In that way, it also inherits a lot from Paper Mario; like, it was always still a Mario game with bright visuals and a colorful supporting cast, but in the end, they still wanted you to take the threat of Bowser (or whoever took over his role as the final villain) seriously. Same here; chatting with a lost moth minion at the local bar, or frat bro ghosts desperate to end their patrol and go party, or a nerdy shark on a Segway , or whoever else about their problems is good fun, but at the end, you still have to do something about the looming horror that is Mr. Stitches and his plan to take over the world. 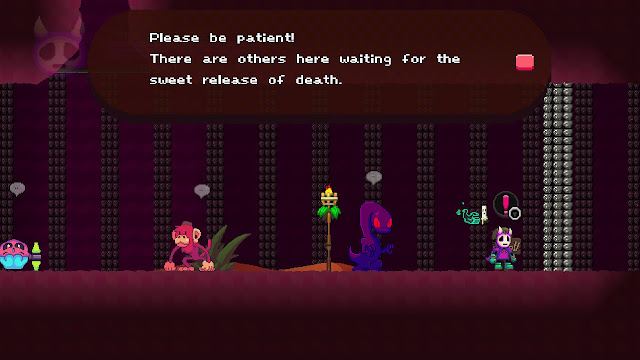 And like many other things, it even plays that in an unexpected, original direction. As more and more big questions pile up, Underhero never loses its sense of humor, but does move from a “big epic adventure” tone to more of a conspiracy thriller. And you know what? They do a really good job with it! Wanting to figure out where it was going, what secrets they were hiding, Mr. Stitches’s ultimate evil plans, it all worked. And there’s enough there that it never feels like it’s being done for the sake of it; you can even pick up on a lot of the twists, or at least the general direction of where they’re going. There were several times where I said “Wait, we haven’t dealt with this dangling plot thread for a bit,” right before it was brought up and explained more. That’s a good sign that the writers did a good job of foreshadowing their ideas.

So yeah, if any of this sounds interesting, I can’t recommend picking up Underhero enough! I loved every minute of it, and I’m looking forward to whatever Paper Castle Games does next. There are a few more elements of Underhero that I want to discuss, but they’re all extremely spoiler heavy, so I want to give anyone who hasn’t played it yet a chance to duck out and try it first. If you’re ready for discussion of the end of the game, feel free to check in after the skip.