Haven: Love on the Run Beyond the Stars

There are a lot of indie games that I’ve been meaning to try and just putting on the backburner; there are just so many titles out there nowadays, and stuff will slip through the cracks, but I do make an effort to circle back around to things on occasion. Such was the case with The Game Bakers’ late 2020 release Haven; I had been curious about their previous game (2016’s Furi, a boss rush game) before deciding it wasn’t for me, and after seeing a lot of praise for Haven, decided it sounded more up my alley.

But I sort of forgot about it after that, until a few weeks ago when I was itching for something new to try, and it popped up in my feed thanks to a recent update. That seemed like as good an onboarding point as any, so I gave it a shot. And after that, I was so enthralled that I basically ended up shotgunning the game in under a week. 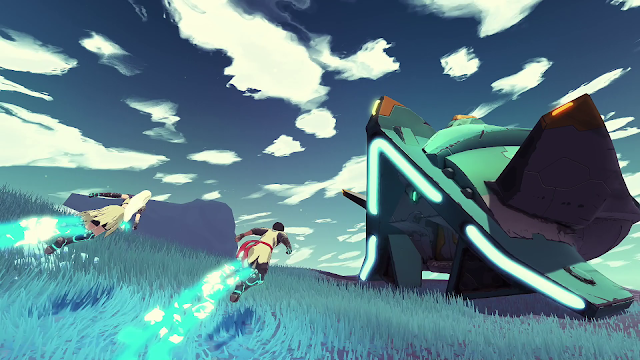 Haven is also a weird game, because it feels simultaneously very difficult and very easy to describe. On the one hand, at its core, it’s one of the oldest story archetypes in existence: that of the star-crossed lovers, just set in a far-off sci-fi world. Yu and Kay are the main pair here, young adults from some sort of interplanetary empire known as The Apiary, fleeing their arranged marriages to live together. The game opens with them having recently settled on Source, a far-off shattered world hopefully outside of The Apirary’s purview, following a daring escape from home.

While deciding what to do next, their new home, an RV-esque spaceship Yu fixed up called the Nest, sustains heavy damage from an earthquake, stranding them in place. And so begins the game proper; you guide Yu and Kay around the fragments of Source, searching for replacement parts, foraging for food, fending off wildlife, and dodging The Apiary’s search efforts. There’s constantly stuff to do to keep this loving couple up and functioning, and it gives the game’s story an almost episodic, cliffhanger-heavy approach that is well-executed and addicting.