I managed to cover a lot of different games in 2021 (and even launched a page to collect all of my indie game reviews!), and consequently, don’t feel the need to write any sort of loose-ends wrap-up piece like I have in years past; I’m not sure there would be enough games or ideas to fill it out. However, there’s still one big game I played last year that I want to cover, a late release that I played towards the end of the year and wound up being one of my favorite games of the year: Fabraz’s Demon Turf.
Demon Turf is a game that I had been excited about for a while. I hadn’t followed any of Fabraz’s earlier games, but I’m always on the lookout for new and upcoming 3D Platformers to try, which is where I first came across it. My excitement only grew upon trying the early demo when it came out on Steam, and then even further after it came out early last year that Playtonic (makers of Yooka-Laylee, among other projects) would be picking it up as one of the first three games in their Playtonic Friends publishing division. Both of those pointed to good things, which got me a little worried that I might be overhyping it.

As it turns out, my concerns were totally unfounded! Demon Turf wound up being my favorite 3D platformer since… probably A Hat in Time? In just every way it’s delightful, but it also manages to squeeze a lot out of its indie game scale; and along the way, it tries a bunch of interesting twists on genre formulas that make the entire thing feel that much fresher. 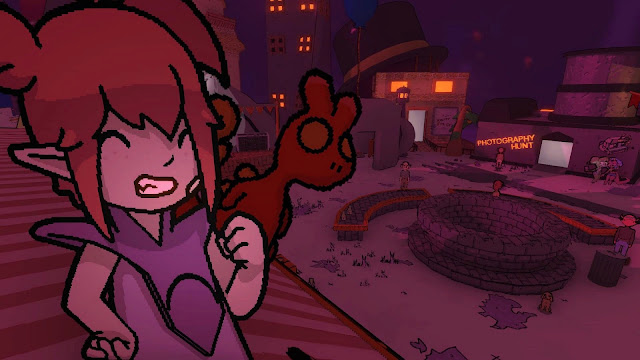 So let’s start with the basic set-up: Demon Turf is about a young demon girl named Beebz, who’s a bit of an outcast in the underworld and plans to rectify that by taking on the Demon King. But to challenge him for the throne, she’ll need to first take over the territories of four other demon gang leaders who serve under the King, which you do by beating all of a world’s levels and then challenging them to boss battles.

It’s a pretty standard 3D platformer set-up at its most basic level. Each level gives you a major, end-of-level collectable, a la Mario’s power stars or Sonic’s emblems (here, it’s batteries), and there are a variety of optional secondary collectables that can get you a variety of unlocks (in this case, sweets). You start in the main hub world, Beebz’s home of Forktown, and from there, travel to one of four smaller world hubs, each of which has seven levels leading off of them like spokes; one easy level lets you into the world’s main square, from which you can tackle the remaining six levels in any order. Collect the battery at the end of every level and you open the boss door.

It’s all pretty standard stuff for this type of game, but Demon Turf pulls it all off well. And really, that extends to the other fundamental mechanics. A lot of work has clearly gone into refining the movement in this game, and it all really shows, as Beebz controls incredibly smoothly.