Nexomon: Extinction Offers an Interesting Story and Some Fun Twists on the Monster Collecting Genre 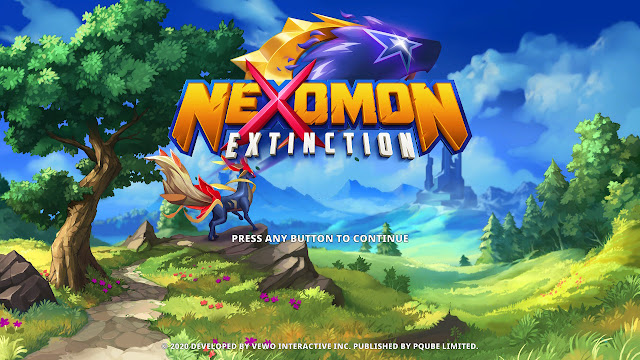 I’ve still been thinking about the Monster Taming genre a lot as of late. Which makes sense; as I’ve said in the past, it’s a game style that means a lot to me. I loved it growing up, and as someone who’s gotten more and more into the indie game sphere, I’m thrilled with the number of small projects tackling the style. New ideas and directions from new talent is really what helps an idea grow.

I got some of my thoughts about this out in my Pokémon 25th Anniversary piece from late last year, which makes sense. Pokémon’s dominance within the genre is undeniable; it’s far and away both the best-selling and most prolific series in the style, both of which make it most people’s introduction and formative experiences with the genre. This also means that a lot of people have opinions on what Pokémon as a series should be, though, especially compared to what it actually is.

My take on it from last year can more or less be summarized as “The mainline series is trying to be the JRPG version of something like Animal Crossing, and most of their changes have either been to enhance that side of the game, or to make the surprisingly-deep competitive side more accessible for those who want the challenge.” And I also think all of that is good, even if it is not yet perfect or to everybody’s taste. It’s a fun vision on the whole.

Of course, that’s also why the growing number of other Monster Taming games is good; no one vision of the genre can sate everyone, and it’s good to have alternatives. Which is why today I’d like to talk up VEWO Interactive’s Nexomon: Extinction, another new entry into the genre, and a very worthwhile one in my estimation.

It’s one of the more directly Pokémon-inspired games I’ve seen, and never quite escapes being “Pokémon, but…”. But I also don’t think that’s necessarily a bad thing; Pokémon at its core is a lot of fun, while also having a ton of variables and decisions that can be adjusted in a number of ways. And I enjoy seeing other people’s potential divergent evolutions of what the series could be, in tweaking these things. 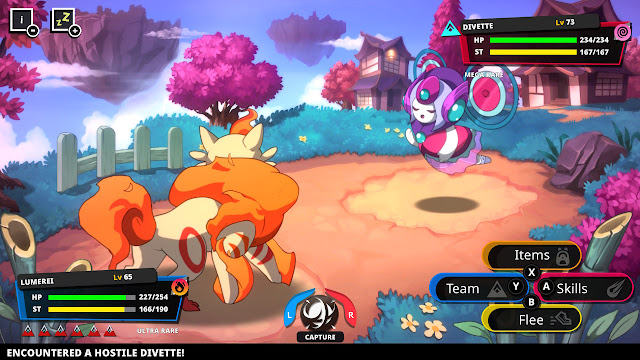 And despite having a fraction of the budget or manpower* of Game Freak, Nexomon: Extinction still provides its own unique voice and polished experience. It’s not going to be for everyone, because again, I don’t know that anything can truly be that, but I do think there’s something here for both people who still enjoy Pokémon and want more new experiences like that, and people who have found the interests drift from the main series but still find themselves missing some aspects of it and wondering what could be.

*Counting the credits, I saw 1 designer/programmer, 1 producer, 6 music credits, and 19 artists and animators.

Unlike with Monster Sanctuary, there really isn’t really a big twist on the base-level Pokémon formula in Nexomon: Extinction. The gameplay still alternates between top-down overworld segments where you explore the game’s world, and turn-based RPG battles where your team of up to six elementally-themed monsters with up to four attacks each takes on either a solo wild Nexomon or opposing trainer teams.
Read more »
Posted by Theo at 11:16 PM No comments:
Email ThisBlogThis!Share to TwitterShare to FacebookShare to Pinterest
Labels: Indie Games, Monster Taming Games, Nexomon, Nexomon Extinction, Pokémon, Recommendations, Reviews, RPGs, Steam, Switch, VEWO Interactive, Video Games

Last year, I did an “end of the year” supplemental playlist to go with my normal summer playlist (which usually ends up covering the first two-thirds of the year anyway), and I kind of liked doing that. So it’s making a return this year to follow up my Summer 2021 list, especially since there’s a lot of good stuff I’ve been listening to since then. Like normal, I’m including a playlist link up top, followed by some stray thoughts on various entries on the list, and then a full text listing at the end. And as per usual, it’s mostly 2021 stuff, but I’m also only one person doing this on the side, so sometimes it takes me a while to get around to trying things.

To start: last time, I called CHVRCHES Screen Violence my album of the summer, and if I had one complaint, it was that it felt a little shorter than their last few albums. Well, they released a bonus version in late October that included three new songs, all of which are stellar. Especially “Killer”, which might be my favorite song on the album now? “How Not to Drown” is hard to top, though.

Moving on from my favorite album on the last list, to my favorite album on this list: it’s Mercurial World by Magdalena Bay, which has been living in my brain for the past month or two. Every song is just great, layers upon layers of hooks and melodies and interesting things. It’s almost hard for me to pick three songs off of it, but “Hysterical Us” is probably my favorite track (I absolutely love that main piano riff). And “Secrets (Your Fire)” feels like the perfect introductory single to the album (I think it was the first track of theirs that I heard, although I’m not positive), plus it’s such a smooth jam. A third pick from the album was difficult, since there are so many good songs. Just by how much I enjoy the songs, I’d probably go with album closer “The Beginning”, but I think part of what I like about it is how it works as a final track, so I left it as a surprise. After that, it was a tough call between the title track, “Chaeri”, “You Lose!”... but I ended up going with “Dawning of the Season”.
Read more »
Posted by Theo at 10:09 PM No comments:
Email ThisBlogThis!Share to TwitterShare to FacebookShare to Pinterest
Labels: 100 gecs, 2021 in Review, Chloe Moriondo, CHVRCHES, Coldplay, hex gf, Left at London, Magdalena Bay, Music, Music Mondays, Oh Wonder, Playlist, Smallpools, Snail's House, Walk the Moon
Newer Posts Older Posts Home
Subscribe to: Posts (Atom)