I have a short update on last week’s Summer Playlist post. For those who don’t use Spotify, I now have a YouTube playlist version available!

Just like with the Spotify playlist, there were a few songs that I could find official versions of (and I’d like to stick to those when possible, both to help those artists when possible and to minimize the chance of videos being taken down and affecting the overall list). 147 out of 153 songs on my list had something available. For the other six:

-Polite Fiction: “Arrow” and “Suzerainty” have SoundCloud uploads by the artist. The newer song, “Drive”, has an official upload though.

-Witch Cafe: The same situation as the last time. “Pumpkin Prince” and “Purikura” are on SoundCloud, although “Cauldron Bay” is still only on the artist’s Bandcamp page, as far as I can tell.

-gloss: “Secondhand Beauty Queen” has been uploaded to the band’s YouTube page, however nothing else from that EP (including “Daydreamin’”, which made my playlist) has been. I believe their Bandcamp page is still the only place that has any of those songs?
I’m not going to re-post the full text of last time, since it got a little long; if you want to read any of my thoughts while you listen, go check out the original article!
Posted by Theo at 8:37 PM No comments:
Email ThisBlogThis!Share to TwitterShare to FacebookShare to Pinterest
Labels: 2022 in Review, Music, Music Mondays, Playlist, Summer

A Pair of Petite Platformer Recs: Transiruby and Flynn: Son of Crimson

I have an idea for another fairly-large article in the works. However, the writing on it has been going slowly (in addition to some real-life delays), and I wanted to do something in the meantime. It’s been a while since I did my last round-up of smaller recommendations (my two-parter on 3D Platformers way back in November and December… wow, it does not feel like those were that long ago…), so why not another one of those?

Once again, I’m looking at platformers, but today we will be remaining firmly in the realm of two dimensions and red-themed names, with Metroidvania title Transiruby and kinda-sorta-Metroidvania-like Flynn: Son of Crimson. 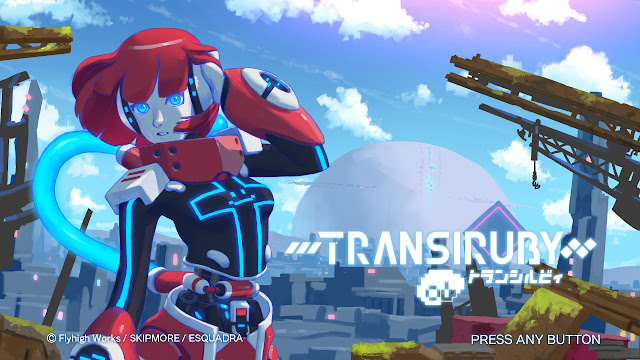 I’ve said in the past that the Nintendo Switch is a great platform for indie games, but this was even more true early in the console’s life. It was much easier for a small but well-made game to stand out in the eShop back when there just wasn’t as much on the console. One of the big beneficiaries of this was Kamiko (which you may recognize from waaaay back in my 2017 year-end round-up), a title by solo Japanese developer SKIPMORE that was released about a month and a half after the console launched. I had heard basically nothing about it when I saw it while browsing the eShop for new games to try. There weren't a ton of bigger games overshadowing it yet, it wasn’t expensive, and it looked solid, so I gave it a shot and enjoyed myself.

I hadn’t thought much about it lately, until I was browsing upcoming games and saw Transiruby. Once again, it looked like a cute little 8-bit Metroidvania. Of course, given the current crowd of the eShop, that wasn’t enough to just give it a try on a whim; so I looked into it a little more, at which point I went “Oh shoot, this is the Kamiko guy!”, which was enough to convince me (although for those who don’t have that past experience, there is also a Steam demo you can give a whirl to see if it’s your thing).

It is once again that time of year, the point late in the summer where I decide “yeah, that’s a good enough cut-off” and build a loosely-defined playlist of what I’ve been listening to lately. There’s a lot to cover in this year’s version; I feel like I spent a lot of time browsing new music the past few months, and I had a lot of thoughts to write out about some of it, so let’s dive right into things.

9/21 Update: There's now also a YouTube Playlist version, for those who would prefer that:
It's still missing the Witch Café songs, as well as one of the gloss songs and two Polite Fiction songs (although those can be found here and here).
Let’s start with the big guns: my pick for Album of the Summer is The Kick, by Foxes. I listened to her debut album Glorious back in 2014, and it was fine. I didn’t revisit it a ton, so there’s a lot of it that kind of faded from my memory, but there were definitely stand-out parts, like the dramatic timpani rolls and stuttered vocals of “Youth” and the layered, Florence + the Machine-like vocals on the chorus of “Holding onto Heaven”. But I ended up missing out on her 2016 follow-up, and probably would have missed out on The Kick had my brother not sent it to me.

I kind of really regret not checking out All I Need, though, because I really did not see her swing into Carly Rae Jepsen-style dance-y synthpop on The Kick coming, let alone her skill at the style. This really is exactly what I want out of a summer album, just non-stop sing-along choruses and sparkling synth hooks for days.

Every one of these could be a standout single on a normal album, and it makes the 40-minute album breeze along. I could run on a loop without getting tired of it (and I suppose I have, to some extent), and I could pick any combination of three songs for it (my unofficial limit on a single album’s representation for these lists) and not feel bad (although it was difficult to ignore the pulsing excitement of opener “Sister Ray” or the absolutely cathartic drop in the bridge of “Potential”). With Carly pushing her next album into October, I am so glad this was here to pick up the slack as my soundtrack of the summer. And in the meantime, I definitely need to go back in her discography and see what I missed.
Read more »
Posted by Theo at 10:00 PM No comments:
Email ThisBlogThis!Share to TwitterShare to FacebookShare to Pinterest
Labels: 2022 in Review, Bandcamp, Bastille, Dresage, Foxes, Gang of Youths, Jamie Paige, Jukebox the Ghost, Magdalena Bay, MUNA, Music, Music Mondays, Pale Waves, Playlist, Snail's House, Summer, Witch Cafe
Newer Posts Older Posts Home
Subscribe to: Posts (Atom)