Today brings the second part of my round-up of indie 3D platformers, in order to keep both halves more manageable in length. If you missed the first part earlier this week, where I looked at Tasomachi: Behind the Twilight and Here Comes Niko!, check it out here. Once you’ve read that, we can jump right into the second half: 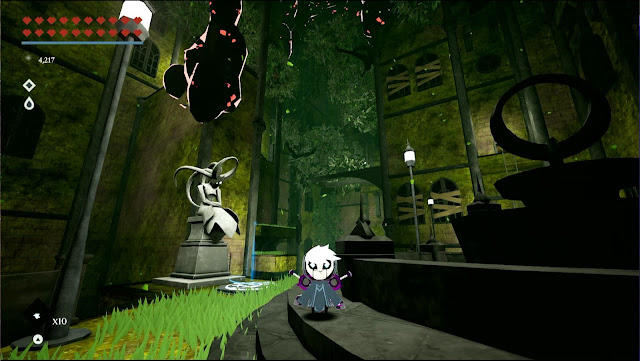 Of all of the games I’m covering in this two-parter, Blue Fire might be the one I went into with the least idea of what to expect? I wasn’t too familiar with anyone involved, I just saw a trailer and decided that it looked interesting. And in that regard, I was pretty pleasantly surprised!

Blue Fire is the debut work of Robi Studios, and it’s a pretty strong opening statement. It’s by far the one here with the deepest lore, so that’s another plus (although it’s also the type of game that gives out said lore via exploration, so don’t expect a big explanation right off the bat). To not give too much away, you play as Umbra, a mysterious figure who wakes up in a ruined lab deep underground. Upon a little exploring, you learn that you are in the depths of a floating castle called Penumbra, built to protect the remnants of the world from an encroaching mass of shadows that long ago engulfed the earth below and now tries to infect the castle. You guide Umbra to learn the causes of these shadows, and to see if they can be stopped.

I’ve seen some compare the game’s world and story to Dark Souls, and I can’t really comment on that, as I haven’t played them. The other comparison I’ve seen is The Legend of Zelda series, and that one I have experience with, and can definitely see. The darker, 3D games stand out as influences, particularly Majora’s Mask* and Twilight Princess; if you played them and dug their surreal melancholy, supernatural gloominess, and generally off-kilter eldritch vibes, Blue Fire has got you covered.
Read more »
Posted by Theo at 1:12 AM No comments:
Email ThisBlogThis!Share to TwitterShare to FacebookShare to Pinterest
Labels: 3D Platformer, Blue Fire, Indie Games, Itch.io, Recommendations, Reviews, Robi Studios, Siactro, Steam, Switch, Toree, Vibes, Video Games
Newer Posts Older Posts Home
Subscribe to: Posts (Atom)