I’ve mentioned it here repeatedly in the past, but I am a pretty big fan of 3D platformers, and I’m willing to give a decent variety of games a try just to see how they are. A few months ago, I did a round-up of smaller 3D platformers that I had found through this willingness to try new things, and it was a lot of fun! I didn’t necessarily have a ton of deep design insights or anything, but it is fun to recommend smaller titles.

And since I’ve found a few more fun 3D platformers in the interim, why not run another small game round-up? Technically, all of them are games I’ve briefly mentioned here in the past, but usually in passing on another article (two of them in the last round-up, and one in my most recent playlist). I’ve enjoyed all of them a ton, so I figure it’s time to give them their own full highlights!

One big difference from the last time I did a round-up, though: the last time, I was as much trying to break down the different components of the genre, and looking at games that did some things well and other things maybe less good. This time, though, there’s a lot more polish to the games I’m mentioning. If you’re also a big fan of 3D platformers and always on the lookout for more, honestly I don’t think you can’t go wrong with any of these. If it’s more a genre you occasionally dig into, though, you still might find something that’s your speed, and hopefully breaking down what I like about these games can help you make a decision.

This was intended to be a bit of a shorter piece, but things wound up spiraling a little out of control, length-wise. And so, today will be the first of two parts; look for the follow-up sometime in the next week or so!


Tasomachi: Behind the Twilight (Orbital Express) 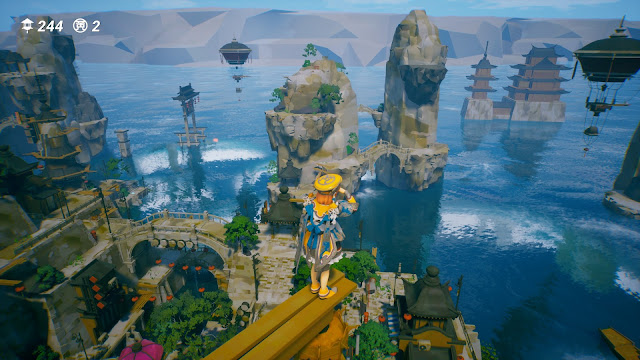 Like all of the games here, I’ve mentioned Tasomachi here before as something I was looking forward to. Unlike the other entries here, though, it didn’t come in a video game article; rather, it came during my Summer 2021 playlist. Snail’s House, an artist who’s now a regular feature in my Playlist articles, provided the soundtrack here (albeit under his other pseudonym, Ujico*), which is part of what made me first take notice of it. And sure enough, as expected, I really did like the soundtrack. But the game it’s attached to is also pretty good!

An Appreciation of Pokémon, for the Series' 25th Anniversary

Back in January, in my 2020 Video Game Round-Up, I made a brief, non-indie game digression to talk about Pokémon, specifically the expansion content for Sword & Shield versions. I was a pretty big fan of both the Isle of Armor and Crown Tundra DLCs, but then again, I am also a much bigger fan of Generation VIII than most people. So, with new Pokémon games on the horizon (both the Generation IV remakes Brilliant Diamond and Shining Pearl later this month, and Pokémon Legends: Arceus in early 2022), plus the added context of a few other games I’ve been playing lately, I figured I would expand a little more on what I like about Gen VIII* and the series as a whole.

*I have no idea what the breakdown of the readership of Out of Left Field looks like, so for anyone who needs a quick primer on which years and games each generation refers to, the series’ Wikipedia page breaks it down in several ways.

It’s come up a few times here (most recently in that 2020 Round-Up, and as background for my review of the wonderful Lenna’s Inception*), but I am a huge fan of Pokémon, going all the way back to the days of Red and Blue. I started right when the Gen I games came to America, and have played every generation of games since then, as well as a number of spinoffs. And as you may have picked up from my discussion of glitch-hunting and such from the Lenna’s Inception article, I was reading different fan sites and forums about the series for a lot of that time as well.

*Speaking of, some good news on that front: Bytten Studio’s follow-up, the monster taming RPG Cassette Beasts, was picked up by publisher Raw Fury (they’ve published some solid titles; I believe I’ve mentioned Dandara and Townscaper here in the past) and will be coming to consoles as well as PC. I’m still super excited for this one!

I say all of that not as any sort of brag, but 1) to emphasize that the series means a lot to me; and 2) because I know my opinion on Sword & Shield is not at all common among fans, although it is partially the result of that long relationship with the games. There are a lot of changes Gen VIII brought that elicited fan ire, but one thing that stood out to me as I read a lot of it was how familiar it all seemed, usually in stark contrast with how it was presented.

Most of the things in Generation VIII that often got cited as “franchise ruining” felt a lot like reiterations of past changes and disagreements within the fanbase. Complaints about an incomplete Pokédex? Gen III received criticism at its launch when there was no ability to transfer your Pokémon from Gen II, and Gen V received similar criticism when it tried to focus on an entirely new set of monsters. Complaints about the graphics? Possibly even more common, from long standing complaints about the games remaining in an overhead, 2D spirited style, to complaints any time the games introduced-then-removed motion in battle sprites, to complaints the moment they switched to a 3D style, with an understated resurgence in opinions that they should just return to a 2D style (although I’ve even seen disagreements there on whether such a switch should be back to pixel art or to animations).*

*My own, long-held opinion on graphics in video games (in general, not just Pokémon) is that the industry as whole is way too concerned on graphical performance and “realism”, especially at the highest level, and that we have long passed the tipping point at which the effort and money still being dumped into achieving these things are not worth the marginally better visuals that result (especially given how many other aspects of the game could use that extra focus). The Pokémon games could do better here, of course, but their greatest constraint at this point is probably more related to short turnaround times for the developers, rather than any sort of commitment to a house art style or graphical engine on Game Freak’s part.

I could go on about the variety of complaints, but my larger point is that each of these complaints has existed before, usually across multiple generations, and it hasn’t stopped people from determining different entries are their personal favorite. Any belief that Gen VIII will break from this pattern strikes me as unlikely. And as long as the series remains committed to its aggressive release schedule (of new Generations every three years, with remakes and third versions or DLC in the intervening years), each new generation is going to be more iterative, with its own new flaws, failed experiments, and successes.

As a result, in my opinion, the different entries are all fairly equal in quality, and your opinion of each entry will heavily come down on how much you liked or disliked the tweaks and fixes it brought in that specific iteration (as well as some degree of personal nostalgia). So, with that said, what personally do I look for in my own rankings? Generally, a decent number of new Pokémon, with preferably not too heavy a focus on legendaries.* A well-thought-out, engaging region to explore. Some interesting new features and quality of life improvements. An installment that mostly stands on its own, without leaning too hard on past games. A lot of these are kind of vague, but it’s really kind of a “know it when I see it” situation, rather than a hard-and-fast rubric, and I’m fine deviating from it to give extra credit for other aspects that each game does well.
Read more »
Posted by Theo at 9:59 PM No comments:
Email ThisBlogThis!Share to TwitterShare to FacebookShare to Pinterest
Labels: Monster Taming Games, Nintendo, Nostalgia, Pokémon, RPGs, Series Retrospective, Switch, Sword&Shield
Newer Posts Older Posts Home
Subscribe to: Posts (Atom)