Nobody Saves the World Is Another Notch in Drinkbox Studios' Belt 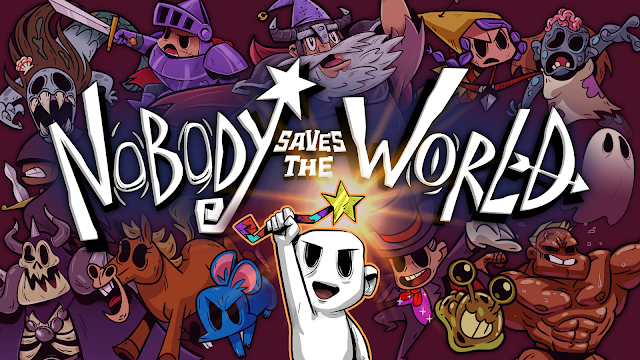 I’ve wanted to write something about Drinkbox Studios for a bit now. I played their Guacamelee and Guacamelee 2 back-to-back a few years ago, and genuinely enjoyed both of them quite a bit! But I never really got a handle on what I wanted to say about them.

They were both good games, solid Metroidvanias with well-designed maps and strong beat-em-up mechanics for combat. Maybe they weren’t the best entries in either genre, and there wasn’t really anything revolutionary about anything they did with either system. But they did genuinely do two things really well, which is no small task! I considered making another Genre Mash-up article, but never quite gathered enough other material, so I settled for praising them in my year-end review instead.

Maybe I couldn’t think of what to write then, but I knew I wanted to check out whatever they did next. Which happened to be this year’s new release, Nobody Saves the World, their first title since Guacamelee 2 four years ago. Nobody is a Top Down A-A game, with the notable new mechanic being that the titular Nobody is a shapeshifter who can jump between over a dozen forms. Each of those comes with its own handful of abilities to learn, and about a third of the way through the game, you get the ability to mix and match them across forms.