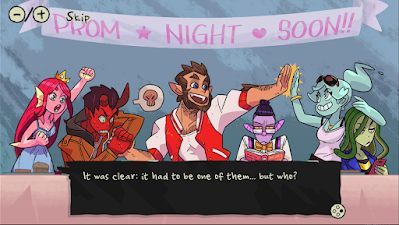 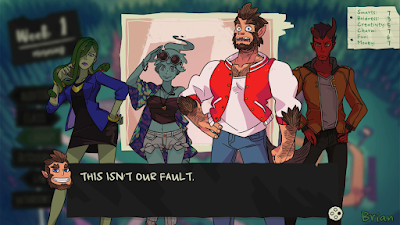 Accompanying your player character on these shenanigans is a cast of six (or eight, in Prom’s free DLC) other monsters for you to date, as well as an assorted supporting cast (many of whom have their own secret routes, if you poke around enough). All of the designs are a lot of fun visually, and the game’s overall sense of style (courtesy of artist Arthur Tien) is a big selling point of the game. The characters mostly draw from fairly common stock character types, and while they generally don’t get any major character arcs, they do at least get some extra depth from the different sides of them that you can see over each game’s thousand-plus potential scenarios, keeping them interesting to deal with. Plus, I feel like some of the newer characters and scenarios (from Prom’s Second Semester DLC and Camp especially) have gotten even better, as the writing team has had to think of more interesting ideas beyond the original character’s basic stereotypes. 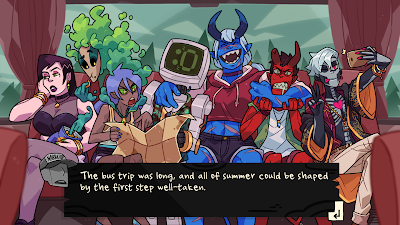 Honestly, more than anything it reminds me of a sitcom, right down to the similar comforting effect from going through one or two episodes or playthroughs a night.* It’s just that, thanks to Monster Prom’s game format, there’s a much more active element in play; you need to actually learn the game’s rhythms and think your choices through to ensure you see new situations or happy endings. And it even structures itself somewhat like a sitcom, with end credits and bonus pictures set over a theme song at the end of each playthrough.**

*Especially if you get the Switch version; I often found myself playing from bed to wind down. Sadly, Monster Camp is not on consoles yet, just PC, so you’re limited to the first game here, but that’s generally enough.

**It’s skippable if you’re short on time, but it can serve as a nice capstone to a run where you finally pull off a secret ending or something. And it really helps that the designers have a great ear for songs to use; Monster Camp especially knocks it out of the park with its selection of “Champions of Red Wine” by The New Pornographers over the ending.

But outside of more superficial stuff like that, they share a lot of fundamentals. Like a lot of sitcoms, the Monster Prom games are built off of a cast of strong and likeable characters getting to interact and bounce off of each other. There’s the strong use of humor, especially leaning on the interactions of those cast members, as well as wacky scenarios they get into. Like a lot of especially cartoon-y or slapstick shows, Monster Prom can lean into a sense of negative continuity, allowing the scenarios to get extreme and then be ignored both for the sake of a joke, and for continuing the story the next time around (even the basic ending of each run is “and then we graduated”, which is clearly ignored in subsequent playthroughs, even in the runs when it does make for a sweet little wrap-up).

But relatedly, the individual playthroughs and their resets don’t really let the characters go through a ton of unique character arcs, so that (like many sitcom characters) they can stay their broad, iconic selves from “episode to episode”. If there is a larger character arc to the game, it’s in your player character gradually learning the quirks of the world and the love interests over multiple iterations; like I said, you very well might need multiple playthroughs just to woo a single character, let alone find any secret story branches. And in some way, that can kind of mirror the long-running “will they or won’t they” subplots of a lot of sitcoms. On the whole, it’s an extremely familiar and welcome experience narratively (there’s a reason good sitcoms remain eternally popular, even while borrowing from broad tropes). But it also makes Monster Prom and Camp incredibly unique in the medium they use to deliver that beloved experience; even setting aside all the gameplay things making them unique and opening up the search to very different types of games with just similar tones, I can’t think of another game that has quite matched this one.

There are other parts of the game’s story that I find interesting, of course; with thousands of potential paths and outcomes, that’s almost a given. But I think I’ll leave those for players to discover. Really, I think the overall effect of the total game is interesting enough on its own to serve as my focus here, as I’m already going on a little longer than intended. The upshot is, I would definitely recommend checking out the games yourself and finding some of these stories, if it sounds at all interesting. And if nothing else, exploring a world of monsters is especially appropriate fun for the Halloween season.
Posted by Theo at 11:16 PM