I’ve written before about my interest in video games that mash-up different genres and the interesting results that it can yield. Today’s mini-recommendation revisits that topic, with Murder by Numbers by developers Mediatonic (another title that I played on Switch, with a PC version available on Steam as well). 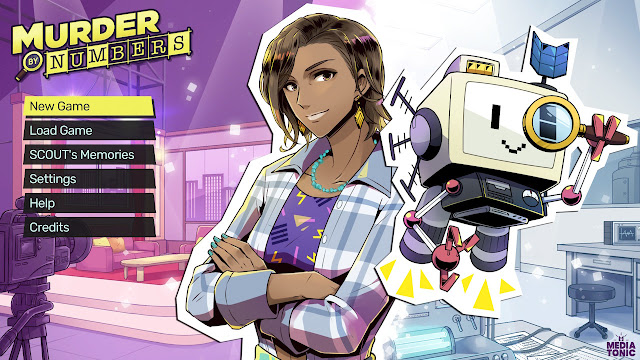 I haven’t covered it as much as some other things, but I’m a huge fan of Picross/Nonagram games. My gold standard for the series has long been Jupiter’s Picross S, which are sort of the platonic ideal of the format. The user interface is intuitive, there are a variety of modes and extra features, the puzzles are solid, and generally, they’re just all around well-executed games.

But they’re also extremely straightforward: if you want no-frills logic puzzles, you get no-frills logic puzzles. Granted, that’s not nothing! Plenty of other games try to offer that same thing, but don’t produce a Picross experience that’s as well-polished as Jupiter’s games. But it seems like something that one could easily build upon by combining it with something more than just super-refined Picross gameplay. I’ve seen a few games attempt that, but so far, Murder By Numbers is by far my favorite implementation of that idea. 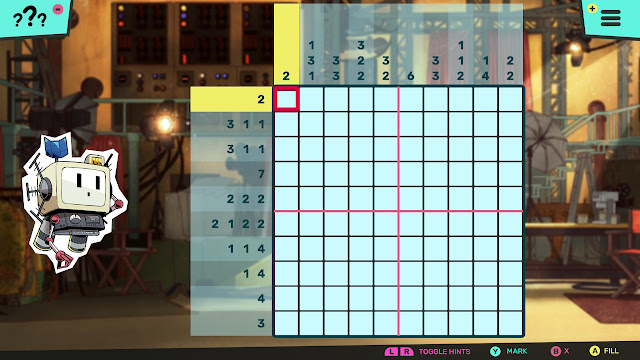 The idea is pretty simple, although there are a few clever touches that add to the overall game. It’s a combination of mystery visual novels and adventure games with Picross puzzles, where one of your (amateur) detectives is a robot with a faulty visual processor. You look in the field for clues that serve as your items to use, but the robot needs to “decipher” what it’s seeing, by way of you solving the puzzle. It’s a really elegant explanation on a lot of levels (“Why do I need to “solve” the thing I’m looking at? Why is it so blocky?” etc.).

Of course, the biggest of those levels that it succeeds is the most basic one as well. It’s not really a secret that many detective games have a pretty major flaw, in that an investigation is a massive, open-ended thing, and it’s hard to map that onto a full range of choices for the player, particularly in a way that doesn’t also guide them to an answer.* It’s not something that totally ruins the genre, but it is a notable quirk that regularly pops up. I don’t know that Murder by Numbers totally solves that issue; it is entirely possible for you to figure out the solution to a case well before your detectives do, for instance.

*For those wishing for a more in-depth look at this and how other games have tackled it (to varying success), Game Makers’ Toolkit of course has a good episode on the issue.


But I do think it does a few things to help cover this issue. Part of it is, of course, going for a narrative justification. Honor and S.C.O.U.T., the detective duo of the game, are amateurs tackling a whodunit out of necessity rather than any sort of training or interest, and you’re very clearly guiding around these existing characters rather than inserting yourself into the player character role. That narrative justification… doesn’t totally solve or excuse the issue, but it does prime the player to be a little more receptive of things 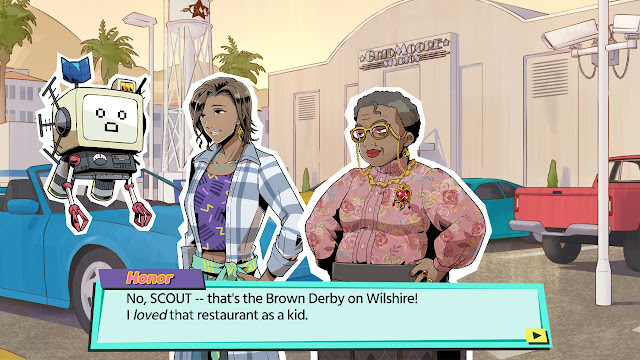 The other trick, though, is more interesting, I think. Essentially, Murder By Numbers presents the player with in-game actions that operate on a symbolic level for the thing they’re standing in for, sort of like a Metaphorical Mechanic. For example, whodunit stories operate on some level with logical deduction; you take the separate pieces you have, fit them together based on what you know, and slowly, the explanation takes shape.

And that’s why Picross puzzles make for a genius stand-in, as a game mechanic: it’s a literal example of the same process. The puzzles give you a grid and a set of numbers telling you how many of the squares need to be filled in, and whether there are any gaps between them. Slowly by surely, you use logic to fill in squares and mark out gaps in some lines, which gives you a rough outline, which you can then use to get a more defined picture in other lines, and so on, a feedback loop based on all of the random data you’re presented at the start.

There are other ways the game’s systems line up with detective stories, too. For example, you find the evidence puzzles by doing sweeps of the crime scene visually, with a sensor indicating whether you’re close. And 100% completion of the game relies on finding every clue. So thoroughness is rewarded, and the easiest way to ensure that thoroughness is developing a systematic, comprehensive search of each scene, and being sure to check those scenes regularly to see if new context has made any new clues stand out. It might sound exhausting, but the developers did a good job of balancing things, so no one scene is too overwhelming in size, and there are also additional UI tells you come to expect to let you know when you’re done with a region. Once again, being able to observe the small details as a detective would is a plus.

There are other nice things about combining the two styles of games, too. Tying the puzzles to a story progression allows for a nice sense of forward progress that some purer Picross games lack. Sometimes, when playing the latter, I’ll find myself zoning out and just doing puzzle after puzzle, even when I’m no longer in the mood to keep playing them, just because the end of one puzzle and the start of the next can just bleed into each other, one endless string of filling out rows and columns. I never had that in Murder By Numbers, as there’s a pretty clear ebb and flow to the scenes that makes it clear when you can take a break and come back later.

It also helps that the non-Picross half of the game is a good, pulpy whodunit mystery serial of a visual novel that can stand on its own. The setup is simple: S.C.O.U.T. is a robot who wakes up in a Hollywood dump with no memories. He seeks out Honor, co-star of a popular network murder mystery series, thinking she’s a real detective who can help him rather than an actor. But the pair suddenly ends up being forced into solving real murder mysteries when Honor’s showrunner inexplicably fires her and immediately turns up dead. 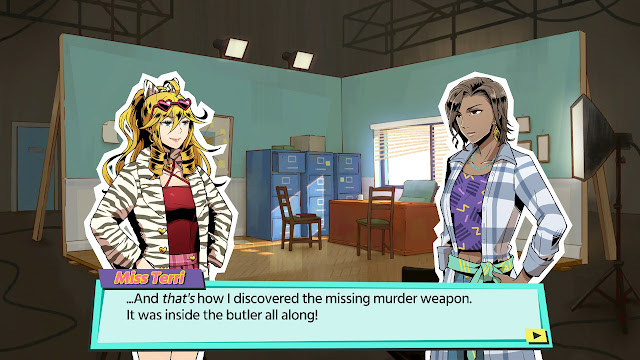 The game is pretty clearly modeled after the type of show Honor stars in, subdivived into four episodes where the duo of new partners show up at places just after some murder has taken place and deciding to find clues and question suspects to piece together what happened (as well as find a few other clues pointing to a larger overall mystery). I don’t know that it will win over non-fans of the genre, but if you like this type of story, Murder By Numbers knows what it’s doing and executes the style well.

It helps that the character design and art direction are both pretty strong as well, with a distinctive cartoon style and a nice blend of archetypes and characters quirks for the former, and a period 1990s aesthetic that’s apparent yet tastefully understated for the latter. The music also leans into that era, with a smooth jazz-inspired soundtrack that’s a little cheesy, but I still appreciated it (especially in the context of soundtracks for other Picross games or similar titles, which often get repetitive much quicker than this one).

In all, I thoroughly enjoyed my time with Murder By Numbers. The game ends on a sequel hook, and its genre and episodic format would make it well suited to more entries, so I would be excited to see this become a recurring series. It’s certainly a bright spot amongst the sea of Picross video games out there, and worth checking out.
Posted by Theo at 12:42 AM